Suzie Birch, associate professor of Geography and Anthropology at the University of Georgia, was last year awarded the Wilson Center Research Fellowship through the Wilson Center for Humanities and Arts. Offered through the University of Georgia, the fellowship supports excellence in the humanities and arts by providing faculty with time to engage in research and creative activity. Birch’s work focused on writing a book manuscript entitled More than Meat: Animal-Human Relationships in Prehistory. “This fellowship provided two course releases for the fall, so it really gave me time to dig in and do research and writing,” Birch notes. “I was able to do research for this book as well as a few other projects, and I even put together a book proposal for another, related project.”

Birch’s proposed book will be a foundational text that centers on a more holistic approach to how we consider the role of animals in our shared past. “While the complex and fundamental role that animals play in our conceptualization of ourselves as a species has gained some recognition in human-animal studies more recently,” Birch postulates, “this relationship is often reduced to one of consumption and power in the archaeological record, a paradigm that this book will disrupt.” The book will apply evidence from the field of zooarchaeology to understand animal agency and their dynamic roles as symbols, co-workers, and companions from the earliest prehistory with relevance for multispecies relationships today and in the future.

In addition to the fellowship, Birch is also working on a few other projects locally and abroad. “I just got back from fieldwork in Sardinia, which was lovely,” Birch states. “I am starting a new project there which requires both archaeological and environmental sampling, and a good deal of mapping isotopic data produced in my lab.” This project is part of a larger project focused on understanding the development of agriculture across the Mediterranean with reference to landscape use and climate adaptation over the last 5,000 years or so.

Birch also recently finished filming a 20-episode course with Wondrium, which is a streaming service that offers thousands of courses and documentaries. “That was an amazing experience,” she states. “One thing I really enjoyed about it was learning how to write for a teleprompter rather than something meant to be read on paper, and working with my own editor and producer.” The course is currently in post-production, with the finished product scheduled to release next year. The course covers all of human history from its earliest origins in Africa to the origins of agriculture, with a focus on how humans adapted to climate upheavals and diverse environments around the world for hundreds of thousands of years, and the role that archaeological and geographic science has played in the story of its past.

Most rewarding of all, Birch notes, is her involvement in TrowelBlazers, a blog dedicated to highlighting women's contributions in the fields of archaeology, paleontology, and geology. “It will be ten years next spring since the four of us founded the project as a blog,” Birch states, “but it has grown into so much more. We want to inspire future generations to ‘see it, be it’.” As part of a team, Birch has done a lot of academic and popular mixed media work for this project. She consulted on the design of a children's doll, organized an original photographic exhibit, called Raising Horizons, which launched at the Royal Geological Society in London in 2017 and toured around the United Kingdom for two years, and she has even published in academic books and journals as well as mainstream media. Furthermore, the team's work was recently featured in an NPR interview. “Perhaps the most enduring part of our messaging is that women are not just only recently becoming involved in these fields; they were there all along, and not as the 'lone wolf' often envisaged by historians, but rather, had their own networks and made substantial contributions that unfortunately in many cases, were subsequently minimized or erased,” Birch states. “One of the most gratifying aspects is when I meet new people at conferences and they tell me how much they love TrowelBlazers, and found inspiration from our website. And it's a great honor that we now see more and more people actually using the term 'trowelblazer' to refer to a trailblazing woman in these fields!”

To learn more about Dr. Suzie Birch’s work, please visit her directory page on the Geography Department’s website. You can also follow her work at the Wilson Center for Humanities and Arts, Quaternary Isotope Paleoecology Lab, and the Center for Archaeological Sciences, as well as on Twitter, LinkedIn, and Google Scholar. 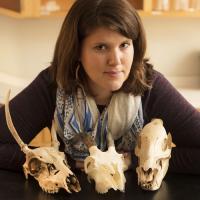