An Elephant Never Forgets: How GIS Helped Save a Playground Pachyderm

If there is one thing that elementary school students around the world can agree on, it’s the wonderful feeling of hearing the recess bell. After quietly sitting and learning in class, it signals freedom to run, laugh, and play with friends, usually outside in the fresh air.

But in Victoria Falls, Zimbabwe, Baobab Primary School had a 10,000-pound problem that prevented students from leaving their classrooms in June 2018. It seemed that a male African elephant wanted to share snack break by enjoying some baobab fruit from a schoolyard tree.

“The students’ safety was an absolute priority for the school,” said Andrea Presotto, an animal cognitive geographer and assistant professor in the Geography and Geosciences department at Salisbury University in Maryland. “Though largely docile, male African elephants are protective of their space and will become aggressive if threatened by humans.”

Luckily, the elephant was one that Presotto and her team, including UGA Geography professor Marguerite Madden, at the Victoria Falls Elephant Project had been tracking using GIS. Knowing how African elephants move through space and, especially, how this elephant had been behaving in the community, they were able to execute a plan that would clear the schoolyard and save the elephant’s life. Through the use of ArcGIS StoryMaps, the team was able to clearly record their findings should they ever need to use this method again.

More of the story can be found on ESRI - ArcNews! 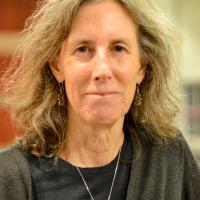 Professor/Director of the Center for Geospatial Research
mmadden@uga.edu